While there were over 63 million tribute messages been published on China’s Twitter-like, government-controlled, micro-blogging site Weibo within a day of the Apple CEO’s death, perhaps there was not a single one of those messages caught as much attention as the Twitter tribute sent by Yao Ming.

On Oct. 9, Yao Ming wrote on his Twitter “Sorry to hear about the passing of Steve Jobs. A great creative leader.” and attached a video link of his Apple ad.

Although Twitter is officially blocked in China, Yao’s tweet immediately caught the Chinese national media attention. Within only a few hours, Yao’s tweet on Steve Job’s passing became one of the top news on the sports section of almost all the top Chinese websites. 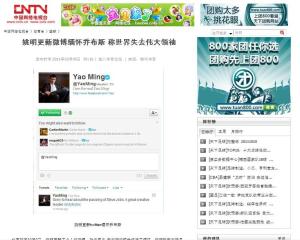 Yanqin "Carrie" Xu is a Shanghai native, currently living in the San Francisco Bay Area and working for the Pac-12 Conference as Senior Manager, International. She is very passionate about sports and international collaboration, and is doing her best to bridge sports between the US and China. Carrie holds an MBA degree from University of Southern California (USC) and has worked for Nike China and Nike International Basketball previously. She was also a Vice President at USC Marshall Sports Business Organization. She can be reached via email at Carrie.Xu@chinasportsbiz.com.
View all posts by Carrie Xu »
« Chinese NBA player Yi Jianlian signed 1-year contract with CBA team Guangdong Hongyuan
Shaquille O’Neal is on China tour, to propose Shaq vs. Yao exhibition games in China »